Every person has at least one go to salad and this is mine. It is so easy to prepare and tastes delicious. Fattoush is a traditional Levantine salad that is prepared differently in Lebanon, Syria and Palestine. Although I grew up eating Fattoush the Syrian way, this recipe, which is more Lebanese is my favorite.

This salad is an essential part of any mezze table and is always present in restaurants menus. It is good as an appetizer, but also perfect on its own for a quick lunch. Also, you can use 1 tsp of the dressing to marinate a chicken breast, grill it and have it alongside the salad for a full meal.

Fattoush is the solution for stale pita bread. I strongly recommend preparing the pita chips at home, instead of store bought. Traditionally, the pita is deep fried. However, this is one of the few times you’ll hear me saying that air frying or toasting them in the oven would actually taste better! This is simply because you want your bread to soak up the flavors from the dressing and deep-fried pita doesn’t do that well. If you have an air fryer, this is the perfect time to use it. I like to season my pita before air frying/toasting them and this would make your salad truly stand out.

Being the simple salad it is, I can’t stress enough the importance of sourcing the best ingredients you can get your hand on. This is key if you want to have a great fattoush bowl. You might find different recipes for fattoush each with different ingredients and this is because people used to prepare it with whatever fresh vegetables they have on hand. So, feel free to add or replace any of the ingredients based on your preference and what vegetables you have. However, the ingredients I have here would give you the authentic taste, if that is what you’re after.

This salad is a favorite of mine not only because it tastes good, but also because it is so quick to prepare. Start by preparing you pita bread and dressing, then chop up your vegetables, toss it all in a bowl and there you go! So good you won’t regret it! 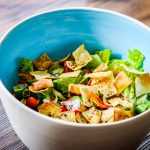 For the pita chips

For toasting in the oven, spread the seasoned pita on a large baking tray and cook in a preheated oven at 200°C/ 400°F for 10 – 12 minutes. I use tomatoes or cherry tomatoes alternatively depending on what I have on hand.
0
0 likes